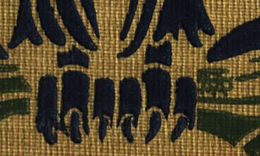 When We Destroyed the Gaspee: a Story of Narragansett Bay in 1772, by James Otis

Dana Estes, 1901
Sacker apparently did bindings for a number of Otis (a pseudonym for James Otis Kaler)  titles, involving eagles and other patriotic symbols.In fact, this title comes in two distinct Sacker bindings--the other one I have seen is a blue version of the cover for An Island Refuge.  I have identified at least twenty-four Otis titles with Sacker designs, but there may be more, as Otis wrote over 150 books for children!  See below for a color variant of this cover.