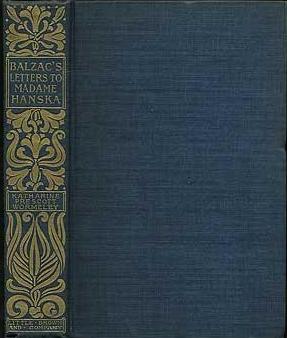 This seems to be a spine-only design! Although it is signed in the lower right, this design appears on a copy with NO cover design. The floral look of the spine recalls elements of the "Court Memoir" series. (My thanks to Stuart Walker of the Boston Public Library for this image.)  The same design appears on a number of other Balzac titles in the "Pocket Balzac" set, such as Balzac's Letters to Madame Hanska, edited by Katharine P. Wormeley, shown below. This series also includes a similar title-page design by Amy [see below].  The series of volumes was widely advertised at the time.

Below we see a leather-bound version of the "Pocket Balzac" with a different spine design, but one which more closely displays elements of the title-page design, also shown below.